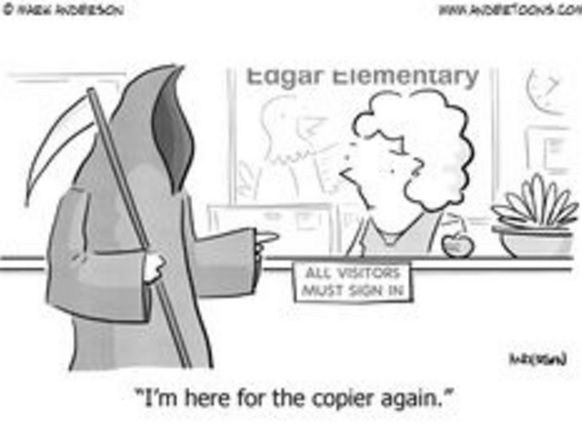 And real men at that – a different specimen entirely from our pale, tired and underfed teaching colleagues.

What draws me to them?

Initially I put it down to that soft white shirt underneath the crisp dark suit. It immediately triggers powerful feelings within of steadfast, monochromatic assurance.

He has all the classic continental elan of a Jean-Paul Belmondo or a Marcello Mastroianni.

Yes, the men in our senior leadership team also like to wear a dark suit these days, but somehow it doesn’t have the same effect at all – just feels as if a little boy is inside there screaming “look how grown up I am!”

Yet photocopier-man is more than merely film-star cool and handsome. He is our hero, our lesson-rescuer, the chivalrous heraldic knight in our frantic, paper-jammed world.

He is the the clean-cut 1940s Spitfire ace and AA roadside-rescue man rolled into one extremely handy and enticing package. So, I ask, who wouldn’t?

He first came to fix the imposing but troubled staffroom showpiece, the Greening 321. The Greening is typical of most school photocopiers offering us hope when first installed but then sticking stubbornly on certain jobs and with others, trying to ram a whole load of sheets through at the same time.

We have similar trouble elsewhere in the school with the older Turbo Gibbmeister 456 – all the lights are on, but nothing seemingly going on inside.

We thought there might be a brave new dawn when they wheeled away the notorious Gove 1950S (aka “The Mangle”) but the new ones seem to be no better.

Anyway, Jake arrived in January with his impressive toolbox and settled down to work. As with his predecessors, I walked over and offered him a coffee.

After an odd little hesitation (had he perhaps heard about me?) he said yes.

Eventually he was happy to let me clean the glass with his lint-free cloth. I caught his eye as I slid my hand to and fro.

Thanks to my, er, previous experience I was able to reel off an extensive knowledge of exposure lamps, charge coronas, drums, developers and toners. He seemed impressed.

After less than an hour of persuasion, he agreed to a date.

He seemed a little awkward, at first, when I started to tell him about “the others”. (Though in fairness to my own much-derided good name, there have only been five other photocopier-men, as I don’t include the fellow who came to fix the staffroom printer.)

But when I pointed out that it was really all about “duplication” Jake appreciated the cleverness of my pun, gave a nervous laugh and seemed to see the funny side.

He now says he’s completely cool about it. As said, I do think that Jake could be “the one” – the end of the “run”, as it were.

So-called friends at school, on the other hand, are more sceptical.

They think that Jake is just the latest. They say that I will get bored again and that, before long, I will be wanting to “replace the cartridge” as they delicately put it.

The teacher wishes to remain anoymous

There are a number of factors which have caused a worldwide shortage of thermal and plain paper receipt rolls.

The factories, in China, which manufacture the thermal coating dye, have been closed by the government due to excessively high levels of pollution. China produces in excess of 80% of the coating material. China has also ceased the importation of paper for recycling for the same reason. This, combined with a US based paper manufacturer being in Chapter 11 Bankruptcy, has caused a global shortage of paper and the coating material.

Costs have been increasing for some time and up to now we have been absorbing these increases. Recently there has been a dramatic increase in our purchase prices, in some cases in excess of 40%.

As of November 1st 2017 all of our paper roll prices will be increased in proportion with our costs. Any fixed price discounts will be voided immediately.

We do not know how long this situation will last. However, we will keep you informed of any developments.

Office printer technology has long been criticised for stagnating in the “good enough” stage for much of the 21st century.

While printer technology accelerated rapidly in the 80’s and 90’s, especially with the invention of inexpensive inkjet technology for home office units, a printer from 2016 isn’t all that different regarding quality or price than an equivalent unit from 2006.

Mostly there have been minor improvements in quality control, in paper management (to prevent jams) and increased ink efficiency, but even these have been small, as much of the technology has already been optimised, at least within current parameters of affordability.

However, that doesn’t mean that the industry is remaining stagnant. Rather than improving the technology, trends in 2017 indicate more combined technology, especially in the realm of traditional large office copy units.

While paper and toner technology may be at about their optimum barring a major change, advances in light-sensing technology, inexpensive computing components and, most importantly, wireless antennae, have led into more multi-function printers with greater capabilities.

To wit, advances in the mobile market, especially business-oriented tablet devices, have resulted in printers that need to be able to do anything, while connecting wirelessly to any authorised device. Additionally, they need to do so cheaper than ever before, and in a smaller package.

What does this mean for you as the small business owner? It means you will, beginning in 2017, start seeing more and more multi-function options that are less expensive yet more versatile.

Instead of a dedicated copier backed up by a dedicated printer or dedicated inkjet color machine, a single machine capable of doing multiple colours, scans, copies and prints from the network or even authorized devices will become more common.

Entire copy rooms will increasingly be paired down to single units which do everything, with benefits regarding both efficiency and cost.

2017 will see printers increasingly compatible with phone and tablet technology, allowing hard copies to be printed directly rather than requiring them to be ported to a desktop or company server before printing. Additionally, scans can be delivered directly to the phone in question, rather than passing through an e-mail server, eliminating both time and a potential security loophole.

This means that you and your employees will not only be able to do more, but they will do so with less while paying less.

With much of the technology inherent in printers now optimized, and components dropping in price, the emphasis is on decreasing the cost of printers both to own and to operate. This means lower printing costs for you overall while gaining access to new features, especially regarding cloud and mobile printing.

It also means less need to pay for multiple machines, as functions are combined into a single unit.

So call us today, to learn how 2017 can be a year of decreased cost and hassle for you! 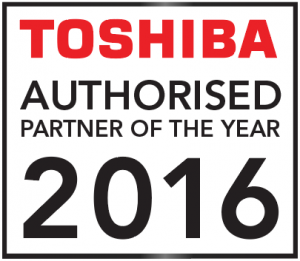 This prestigious honour recognises the dealer that best represents continued sales success, technical service expertise and outstanding customer service and satisfaction throughout the previous year in the Authorised category.

"We have always been dedicated to offering top-notch service and quality products to our customers, and receiving this prestigious award that recognises our dedication is an honour," said Michael McHattan, Dealer Principal, North South West Office Technology - Taree.

"Being named 'Dealer of the Year' is a tribute to the unwavering diligence of Michael and his team who have helped grow North South West Office Technology - Taree to what it is today." said Hari Tharmakumar, National Channel Manager Toshiba Australia Electronic Imaging Division (EID).

The path for this dealer’s success has been one of hard work and tenacity. Originally, this dealership was owned and operated by a long serving Toshiba Dealer, Office Data Systems (ODS). ODS had been through its fair share of challenges when a local Good Samaritan, Coffs Harbour’s Toshiba Dealer, Geoff Hardaker, enabled the company to continue operating. He later opened the door for Service Manager, Michael McHattan to facilitate a management buyout further taking full ownership of the now NSW Office Technology and become Dealer Principal.

"This dealership has outshone others in this category with a staunch allegiance to its customers and a tier of sales success that matches the high values and standards of Toshiba." he added.

For more information about NSWOT or to obtain additional product and service information from Toshiba, please visit www.nswofficetechnology.com or www.toshiba-business.com.au. 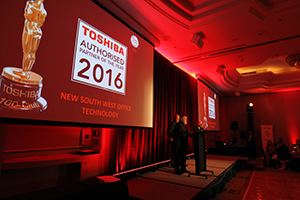 North South West Office Technology - TAREE formerly known as Office Data Systems (ODS) has grown to be a leader in providing business solutions for NSW customers from Kempsey in the North to Bulahdelah in the South, and out into the ranges to Gloucester and beyond. North South West Office Technology - TAREE utilises the best technology in the business with unparalleled customer service offerings. 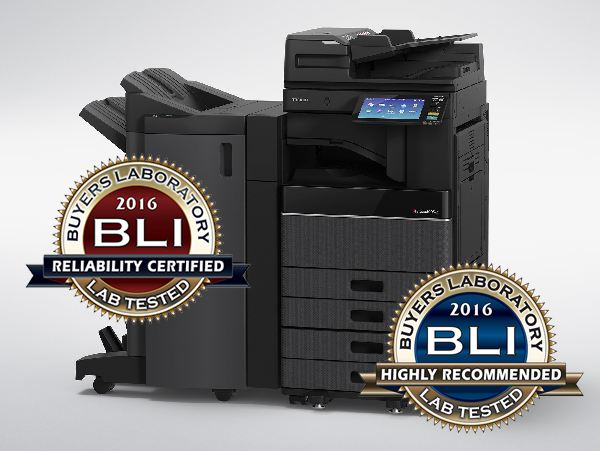 The leading independent analytics provider noted the e-STUDIO5005AC’s ideal fit for medium- to large-size workgroups. BLI was particularly impressed by the product’s outstanding reliability, ease of use and security elements. The recent addition to Toshiba’s award-winning e-STUDIO line also scored high within nine other BLI testing categories including user maintenance, productivity and image quality.
“The Toshiba e-STUDIO5005AC promises to deliver maximum uptime to medium- to large-size workgroups thanks to outstanding reliability and simple procedures for replacing toner, drums and waste toner,” said BLI Senior Editor George Mikolay.  “In addition, the device’s fast job stream speeds mean the device will have no problem remaining productive in environments in which multiple users send multiple types of jobs. And those long-run jobs will not be at the expense of image quality, which proved to be consistent over the course of the test and should meet the needs of most business environments.”

The e-STUDIO5005AC features a newly-engineered feature set to address the print, document management and workflow needs of virtually any business. The software and hardware elements include Intel®’s powerful multi-core Atom™ processor, a customizable tablet-style user interface, Embedded Application Platform and Dual-Scan Document Feeder. All of the product’s components are designed to help organisations operate more efficiently and cost effectively.

“Don’t take our word for it!  The Independent Buyers Laboratory LLC has just endorsed our e-STUDIO5055C as “Highly Recommended” as well as giving it a “Certificate of Reliability” – just two more reasons why our new series of e-BRIDGE Next A3 machines are taking back market share.” – Bret Davies, Toshiba EID General Manager.

The Toshiba e-STUDIO has been very well received by customers working in all industries. Users have embraced the product’s customisable technology, ease of use and its ability to efficiently manage their document workflow.